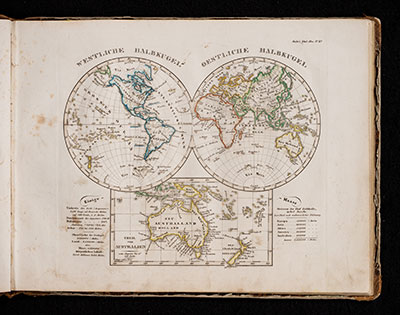 In the middle of 1817 under the direction of Wilhelm Perthes (1793-1853), the first delivery of the Hand-Atlas über alle Theile der Erde, nach dem neuesten Zustande, und über das Weltgebäude, nebst einem geogr. Texte took place. After three further deliveries, 50 maps were available in March 1823, which were later referred to as the "Original edition". Encouraged by favourable criticism and a successful sale, the atlas was immediately expanded and outdated sheets were reprinted. With the appearance of another 25 sheets in five supplements, the first edition of 1831 is considered complete. In addition to Adolf Stieler, Christian Gottlieb Reichard (1758-1837) and Johann Christoph Bär (1789-1848) participated as cartographers. Heinrich Hübbe (1803-71) and the military geographer Friedrich v. Stülpnagel (1786-1865), who continued Stieler's work, participated in the supplements. The map engraving was done by 20 copper engravers and numerous colorists who worked in Gotha and also outside the publishing town.

The Hand-Atlas became one of the most successful atlas works in the history of cartography and remained the scientific figurehead of Perthes-Verlag until 1945. A school atlas ("Kleiner Stieler") was published in 1821 with reduced and simplified maps. It was reprinted every year and remained the market leader among German school atlases for more than half a century.

This is the 20th edition of the Schul-Atlas printed in 1840.