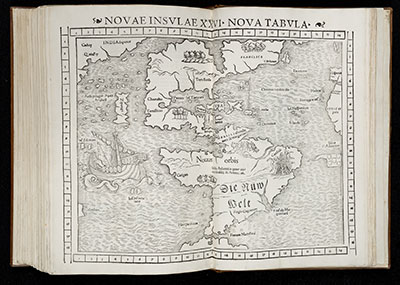 This is the 4th edition of Münster's Geographia, enhanced with a treatise by Konrad Wolffhart (Conradus Lycosthenus) and an elaborate index divided into two parts, referring now to the ancient and the modern maps. It is the last edition of the Geographia published during Münster's lifetime and the first with a royal privilege from the king of France.

The maps are mainly the same, and printed from the same blocks as those of the 1540, 1542 and 1545 editions, with a few exceptions. With the 1545 edition, 6 maps were added and 1552 the map of the Lake Constance was replaced by a new map of Pomerania. The modern world map was printed from a new wood block, the same which already was used in the Cosmographia of 1550. With descriptive text on the reverse of the maps, generally within woodcut borders which are attributed to Hans Holbein the Younger.

3 maps are related to America: The world map Typus Universalis, the map of Scandinavia Septentrionales Regiones XVIII No. Tab. and the last map in the atlas is one of the most important maps in the history of American cartography, the earliest map to show all of the continents of America, titled Novae Insulae XXVI Nova Tabula. According to P.D. Burden in The Mapping of North America this is the 6th state of the map with Temistitan still present in Mexico, which was removed for the later states when this map was also used in the Cosmographia until 1578.