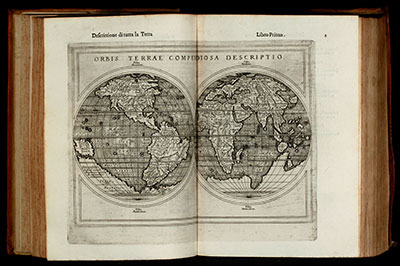 Sixth edition of Ruscelli's translation of Ptolemy's Geografia edited and extended by Giuseppe Rosaccio published by the heirs of M. Sessa in 1598 and 1599.

The Valgrisi copper plates of the earlier Ruscelli editions have been revised by Rosaccio and extended by five new plates. Most of the Ptolemy and modern maps have been extended by ships, sea monsters, fishes, trees and additional place names.