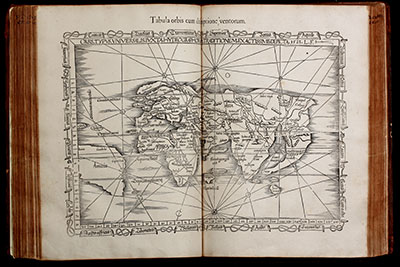 Renaissance atlas with woodcut maps, based on the so-called first modern atlas of Martin Waldseemüller. For the first time, a significant number of maps with the latest geographical surveys and observations are added to the traditional Ptolemy maps. The traditional maps can be found in early manuscripts and from 1477 onwards also in printed versions of the Geographia by Claudius Ptolemy, based on written records from the years around 150 AC.

The first edition of the first modern atlas was published 1513 in Strasbourg by Johann Schott and comprehends 27 woodcut maps after Ptolemy and 20 modern maps. A second edition with identical maps except for the Switzerland map followed 1520 also in Strasbourg. Between 1522 and 1541, four additional editions appeared with maps in reduced size by Laurent Fries. Together with Johannes Grüninger, Fries issued the two editions of 1522 and 1525 at Johann Koberger in Strasbourg. The third edition with smaller maps appeared after the death of Grüninger and Fries in Lyon 1535 with Melchior and Gaspar Trechsel. This latest edition of the important work was printed in Vienne 1541 by Gaspar Trechsel. For the last two editions Michael Servetus was responsible.

The maps of the last four issues were printed from the same woodblocks. In addition to the Waldseemüller maps, Fries added three new maps: A Southeast Asia map, a map of China with Japan and a new world map. The geographical information of this world map is based on the large 1507 world map of Waldseemüller. A full-page armillary sphere by Albrecht Dürer is bound after the maps (Meder 262).