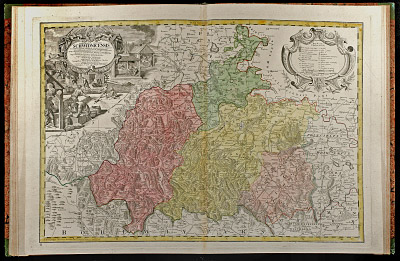 Large special atlas of Silesia by the Homann publishing house.

During the reign of Charles VI., the engineer Johann Wolfgang Wieland was assigned to surveying Silesia. After his death in 1736, Homann heirs in Nuremberg have been commissioned with the publication of the most detailed maps of Silesia at the time.

The atlas consists of 4 overview map with engraved text in margin and 16 large scale detailed maps with decorative cartouches. The maps are dated mainly 1736, some 1746.