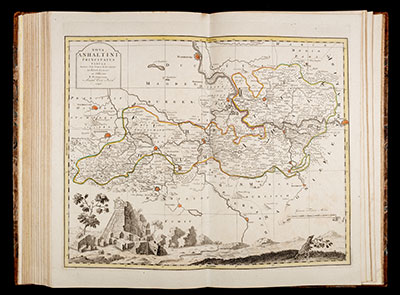 The Atlas Saxonicus novus (New Saxony Atlas), also known as the Schenkscher Atlas, is an important central German atlas from the 18th century.

After the death of the geographer Adam Friedrich Zürner in 1742, some of the maps of the Electorate of Saxony drawn by him were corrected by the geographer Paul Trenckmann and his son Johann Paul Trenckmann. The maps, which were only available as unique manuscript maps, were made available for printing by the Electoral Saxon Privy Councillor and Conference Minister Johann Christian von Hennicke to the publishing house of Pieter Schenk the Younger in Amsterdam, which was also established in Leipzig. Zürner's Saxony regional maps were engraved and published for the first time in 1752 as Atlas Saxonicus novus. Several editions followed until 1811.

Ober- and Unterlausitz in 4 sheets each, Meissen and the Mining Map of the Erzgebirge District in 2 sheets each.