1624: Parergon. Atlas of the Ancient World by Abraham Ortelius 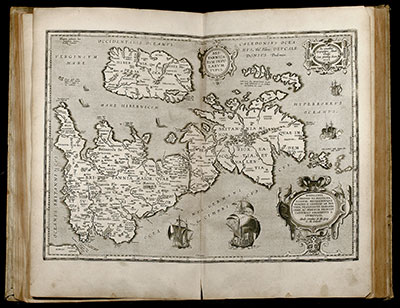 The final and most comprehensive edition of the Parergon, Ortelius's atlas of ancient Geography. The Parergon maps began appearing as supplements within Ortelius main work the Theatrum Orbis Terrarum in 1579 with 3 maps. Over the time, the map collection became an atlas in its own right. The Parergon was published mainly as appendix of the Theatrum, but also a few times separately.

The maps comprises both classical and biblical themes, including the wanderings of Odysseus, Abraham and Paul the Apostle. In this 1624 edition, Moretus included the 4 sheet reproduction of the Peutinger table, an illustrated road map showing the cursus publicus, the road network in the Roman Empire.

Koeman mentioned about the Parergon of Ortelius: This atlas of ancient geography must be regarded as a personal work of Ortelius. For this work he did not, as in the 'Theatrum', copy other people's maps but drew the originals himself which were later engraved by Jan Wierix ... The maps in the Parergon have to be evaluated as the most outstanding engravings depicting the wide-spread interest in classical geography in the 16th century.