1718: Atlas of Friesland by Schotanus 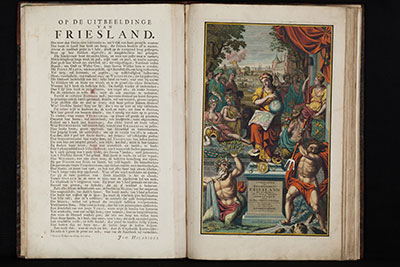 The first edition was produced by Bernard Schotanus in 1698 after he received an order from the Gedeputeerde Staten for a new mapping out of the Grietenijen. This first edition was published in 125 copies only. The rapid topographical changes in Frisia and the small number of printed copies made a new edition necessary just 20 years later. After the death of Schotanus in 1704, François Halma edited and published this 1718 edition in Leeuwarden. He revised the copperplates with information up to date and added the seven historical maps of the Netherlands from Menso Alting, plus a historical overview map of Frisia by Schotanus. The Halma atlas was later re-issued by R & J Ottens. (R. W. Shirley)

Fockema Andreae mentioned in his Geschiedenis der Kartografie van Nederland: The execution of these maps is exceptionally beautiful... one of the best and most beautiful documents of our old cartography.

The heraldic plates showing the arms of the province of Friesland, the arms of the fourteen Frisian districts and the arms of William Karel Hendrik Friso, Prince of Orange-Nassau. The splendid allegorical frontispiece, which is also new in this edition, was engraved by Jacob Folkema after a drawing by the artist Gerbrandus van der Haven and especially the poet Johannes Hilarides, who provides a detailed explanation in verse on the back of the title page.