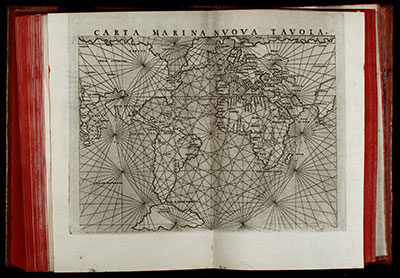 Third edition of Ruscelli's translation of Ptolemy's Geografia and first edition published by G. Ziletti in 1564. The first two Ruscelli editions have been published 1561 and 1562 by V. Valgrisi. The maps of the first five editions of Ruscelli are printed from the same copper plates of Valgrisi. They are based on the maps of Jacopo Gastaldi which appeared in Mattioli's 1548 translation of Ptolemy's Geographia. Ruscelli enlarged the maps and included several notable additions.

Illustrated with 64 double page engraved maps and several woodcuts in text. Whereof 27 Ptolemy maps and 37 'modern' map. Including 3 world maps, 10 maps related to America with a general map of South America, a detailed map of Brazil. Another of Mexico, Baja California, the Gulf Coast and Florida. A map of New England, one of Cuba and one of Hispaniola. 27 European maps (including the North-Atlantic map with parts of Labrador), 9 maps of Africa and 19 maps of Asia.